My 3D knit mojo rolled along over the winter. Most recently, I turned back to Knitted Wild Animals, by Sarah Keen.

The giraffe, panda and elephant in their new home

Sarah’s patterns are easy to knit but need a chunk of time to assemble. These three animals used almost an entire bag of polyfill (I chose not to stuff them with wool, as the panda was really quite big and I wondered if the wool might get a bit felted over time).

The last time I knit patterns from this book, there were mental notes about what I might do differently next time. Did I remember them? Of course not.. but this time I’m writing it down. 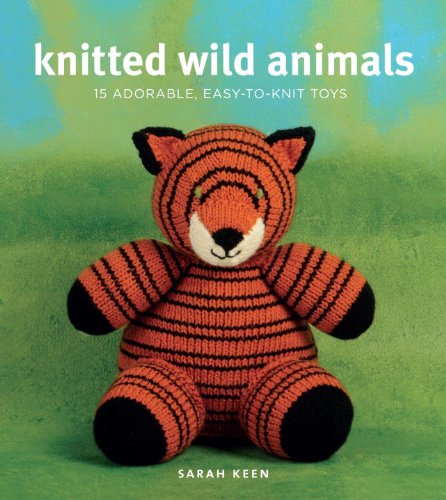 So, there! Now, have you knit patterns from this book? I’d love to hear your tips about what worked for you. 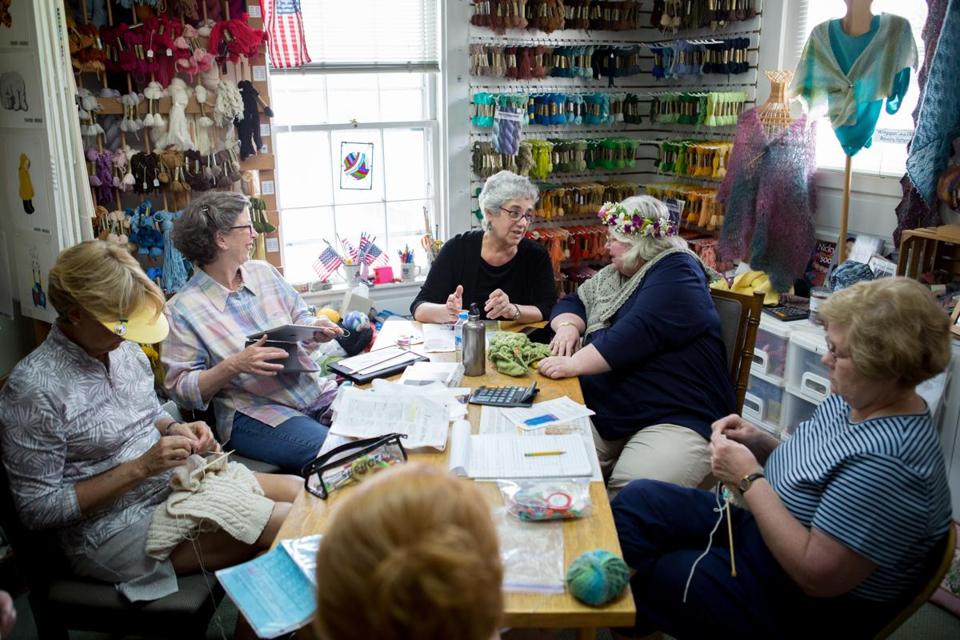 When Janet invited us when the Rowan yarn rep stopped by in February, I had no idea I would fall for their new bulky weight ribbon yarn called Cotton Lustre. When Jess first showed the ball of ribbon yarn, we were all a bit “Eh.” When she showed us the knit swatch, we all said “Ah.”

The first bags of Cotton Lustre arrived without the pattern books, so it was time to take matters into my own hands. Thus, with 2 skeins of Lustre, I whipped up any airy kerchief in a lace mesh pattern, which I share here with you!

One of the unexpected gems from FiberCamp last weekend was Anne’s method to create a knitted tubular cast on. There’s oodles of options, but I’d never seen her version, which uses Judy’s Magic Cast On. Surveying my knitting circles this week, I realized that many have yet to try this versatile cast on technique.

I also hadn’t explored Judy Becker’s book about other ways to use this cast on. So I ordered Becker’s book from 2011, .
Beyond Toes: Knitting Adventures With Judy’s Magic Cast-On

(aka JMCO).
Now, of course, I’ve got several projects I would love to try. Stay focused, Alanna, those Master Knitter corrections need to be in the mail before sailing season begins on May 1.

I’d love to see ways any of you use JMCO in your projects. Links in comments, please?

Go ahead, mock my cables

Harry Callahan knew the minute he drank the sugar spiked coffee that things aren’t like usual. As I plan out a toddler Aran sweater, I seem unable to keep things predictable. So I’m incorporating cables and mock cables in my work… just to spice things up. What’s the difference?

Direct cables rearrange the order in which you work stitches to create twisted and traveling patterns across a knitted fabric.

Mock cables use increases, decreases and slip stitches to embellish the fabric. Take this swatch, “Stacked Buds” from Erika Knight’s Cables and Arans. The mock cable is created by slipping one stitch, knit one, yarn over, knit one, then passing the slip stitch over. Mock cables tend to create columns of cables. I don’t think I’ve ever seen them used in a way that they would travel across the fabric. However, if you’ve got a pattern, I’d love to see it.

In addition to Knight’s stitch dictionary, Barbara Walker’s Treasury of Knitting Patterns has a great selection of mock cable patterns. Walker has these patterns set aside in one section, whereas Knight scatters them throughout the book.

When designing my sweater for the Master Knitter requirements, I incorporated traveling and column cables, which you see at right.

Having lost many cable needles, improvising with tooth picks and twist ties has happened. With mock cables, there’s no worry about losing needles. I’ve fallen into the habit of physically rearranging the stitches when working direct cables. I do cherish a lovely pewter cable needle ring given to me by a knitting friend, made by Leslie Wind, I believe. It’s the perfect choice for projects with slippery yarns… but I digress.

Go ahead, mock my day (hate it when I’m punny!)