For many years, I bought yarn because it

From these purchases, I made things, adapting patterns, making it up along the way.  Despite trans atlantic moves and the inevitable destashing associated with such junctures, I built up a fine collection.  Eventually, I whittled my way down to only leftovers in early 2006. Lately, I’ve bought yarn with the express purpose of making a sweater, a skirt, a pullover and followed a pattern (novel approach, right?).  Patterns have their personalities and reflect not only the materials, but the designer and the habits of the maker.  A successfully recreated project acknowledges features of all. This means you need to know the measurements of the person for whom you’re making.  Ideally, you know what your project pitfalls might be.

Sorry for the selfie! It’s all I have live now.

1) Annamaria Cardigan by Connie Chang Chinchio: This fitted 3/4 sleeve V neck cardigan has nice shaping details and looks like a perfect choice for skirts or trousers.  I noticed the 13.5″ from lower edge to underarm was the same length for all sizes.

Having just finished the Plaits and Links cardi with a similar length, I thought, no problem.  But these armholes are much more fitted than Plaits and Links, which impacts overall sweater length.  I do wish it was longer (and may do something about it).  Measure!  My mods are in my Ravelry project description.

How long is your back neck to tail bone?  Where do your skirt waistbands and trouser waistbands usually lie? Do you wear loose base layers (cami, blouse or knit shirt) or fitted? Keep this in mind when choosing your patterns.

Btw, the yarn is Blackberry Ridge‘s sport weight wool and silk blend.  This purchase falls into the “calls to me” category. I have quite a bit of this scrumptious yarn left and can’t wait to knit with it again. 2. Slip Stich Shell from Green Mountain Spinnery. I picked up three skeins of their lovely Cotton Comfort yarn at the New Hampshire Sheep and Wool, suddenly determined to knit a garment before they came to the Common Cod Fiber Guild in July. The pattern is originally born in the crop top era, so I added several inches, then later when back and added more. I still wish it were longer. Sigh.

This is a good place to point out how ribbed edging is leaving most of my knitted garments. In this case, I did a provisional picot edge.

Modifying the pattern’s crew neck to a slightly scooped neck worked better for summer. I added the cap sleeves as well. The ribbed neckline also switched into the picot edge.  Picot is definitely becoming a favorite for me, but I should keep my eyes open for other options. I wore this a lot this summer, despite the high wool content. I really thought I would wear it this summer

3. The Sasha skirt is a Louet pattern I first admired in 2008, cast on in 2012, ripped back in 2013 and thought for sure I would wear this summer. The skirt comes in three lengths.  I only had enough yarn for the shorter length and didn’t want the maxi skirt or long cocktail length, so I blithely assumed (without measuring) that the 23″ skirt length would be just right (looked good on the model!)

Ha! The first hibernation period began after I originally placed the blue ruffle at the lower edge.  Yuck… it would make the yellow ruffle look totally weird, I decided.  Use the yellow as the kick of color instead.  So I ripped back and at that time, lengthened the distance between the second and the third ruffle.  Finished, and it looked weird… more length needed between the first and second ruffles or the proportion is off.

With some green remaining, I picked apart what I thought was knitting between the first and second ruffles.  Nope.  Now the yellow ruffle and green skirt is separated.  I’ll need to kitchener this together before moving back to my original goal.  Time for project hibernation.  Sigh.

Throughout this spring, I wondered why on earth I didn’t have more spring sweaters.  The Lilly pullover was finally finished in mid June.  I even had an opportunity to wear it while working at Sit and Knit one day before it got too hot!  As I knit, I realized that my warm weather projects the last few years included:

Carmine in Berrocco Touche (this yarn was a great buy at the Boston Knitting Guild‘s yearly auction) was my first skirt, finished in 2009. In 2010, inspired by those wild and wonderful women at Yarns in the Farms, here’s my “leftover skirt.” 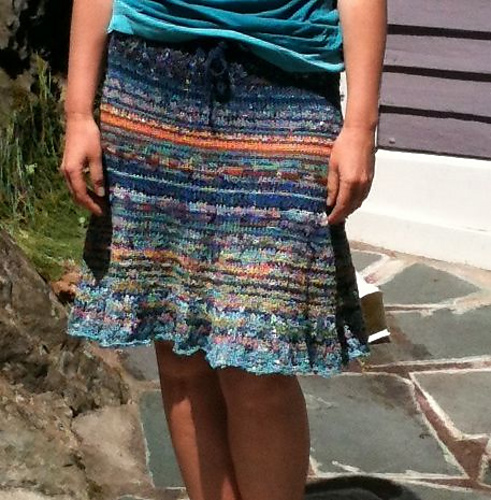 Lily Chin’s crochet dress crowned my spring/summer in 2011, which I wore to my sister’s wedding last year. I am very sorry to say that despite wearing this dress loads, I have yet to properly photograph it. You’ll have to live with this:

Making skirts and dresses has been great and I’ve worn them happily. That doesn’t change the fact that I need some spring sweaters. I retired a lovely cotton zip cardi in 2010. I still miss it. So what did I cast on?

Sasha, a skirt pattern from Louet

It was a fantastically wonderfully project for my long haul international flight. I had three skeins of Louet Euroflax in green and a few other skeins in the stash. I decided that the top ruffle was unnecessary enhancement on my short torso, so the idea was a green tier of lace, a yellow tier of lace and finish with blue.  Or at least that was the original idea.  I’ve finished the green and blue tiers.  What do you think? I’m very tempted to pull out the blue ruffle and move it up to the second tier and  have the yellow kick out of the bottom.  There’s a great temptation to  lengthen the skirt as well. Rippit?  Or, is it time to cast on a spring cardi…..