The last garter stitch rows (nearly 600 stitches each) of my Traveling Thorn are nearly over… thank goodness! It’s given me plenty of time to consider which sweaters I’d like to cast on next. How fast can I knit? So here’s my list of
7 Great Sweaters to Knit

My daughter has a fabulous friend for whom I am very grateful. He’s truly knit worthy. I think he’d look great in Josh Bennet’s Hell’s Kitchen.

If I knit it in Rowan Revive, which is a recycled cotton and silk yarn, it would be ready for next spring without problem. Not sure of which color way I’d choose, although he’d look great in the same colors as the photo. 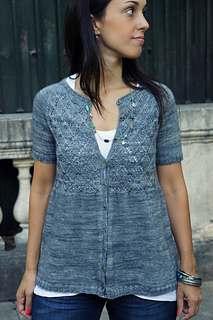 Window to my soul by Joji Locatelli Ever since I heard Ragga Eiríksdóttir speak at the Slater Mill Knitter’s Guild, I’ve wanted to steek this lovely pattern. Unlike many knitters, I’m not afraid to cut my knitting. Isn’t that one of the wonderful things about knitting? If there’s a mistake, you just rip it out and start over. The stitches don’t disintegrate just by cutting them. It’s OK, really.

Once I learned that I could get Icelandic yarn grown in Massachusetts, the project somehow morphed into something somewhat unattainable. I could just cast on in worsted weight yarn, but…. 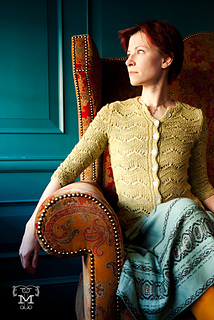 Fiber is like Fritos… there always will be more. This mantra has often helped me resist unfocused stash building. However, it didn’t work when some Rowan Soft Lux shimmered in a close out bin nearly 7 years ago. Finally I’ve found a pattern with appropriate yardage and style. Ann Weaver creates a lot of beautiful knitwear patterns and the Meryl Streep Chevron Lace Cardi is no exception. Time to bust that yarn out of the stash. 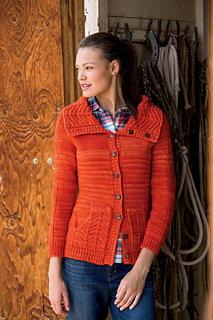 When the Autumn 2014 copy of Interweave Knits arrived at Sit and Knit, I snatched it up immediately for the cover design. Marvelous, cozy, casual and so textured. And that yarn! Once I learned that it was Malabrigo Rios, two skeins alternating, I said, oh maybe not. But what about in Vermont Spinnery’s Weekend Wool? I could drive over Thanksgiving weekend for the Putney Craft Tour. Sage Yarns in Falmouth is hosting Norah Gaughan in December, 2014. One of the classes she’ll teach is starting the Lempster sweater. OOO, I have not seen this yet. Another worsted weight sweater, I know. There’s not even any yarn in the stash for this. But wouldn’t it make a nice knit along?

Is it the photography? Is it the mitered squares and use of color? Is it because I love being on the water?

All I know is that I’d love to knit Greenery by Hélène Rush. The Twist Collective always has the best photography. I have some fab Martha’s Vineyard fiber farm yarns (yes, back from the days when the farm was in Massachusetts!) that would be fabulous for this sweater… except they are worsted weight yarns and the pattern calls for sport weight. I’ll mull this over while knitting the other sweaters, right?

So it looks like I’ll be knitting a lot this winter! In between commission work and corrections on my Master Knitter portfolio, I’d better hope for a lot of snow days!